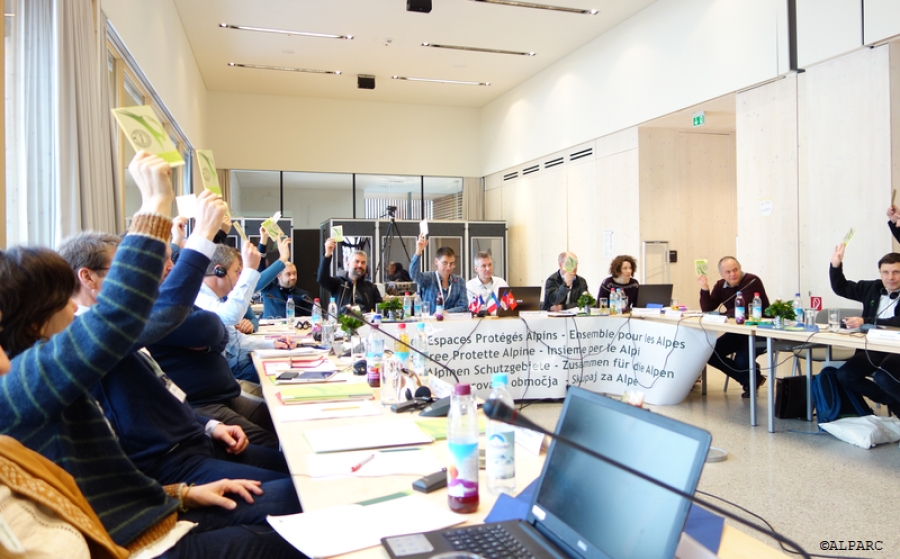 The ALPARC General Assembly was held in the Haus der Berge at the Berchtesgaden National Park in Bavaria on 26th January 2018 in the presence of the Ambassador and General Secretary of the Alpine Convention, Markus Reiterer, the German Focal Point Person of the Alpine Convention, Silvia Reppe and the representative of the Swiss Federal Office for the Environment, Simone Remund. The Director of the Liechtenstein Office of Environment, Helmut Kindle, was also present as a member of ALPARC. The members of all the protected areas and of every category were well represented and this enabled the Assembly to validate the reports of the president, the treasurer and the director and to vote the new ALPARC 2018-2019 work programme as well as the budget for 2018

Other important issues debated at the General Assembly concerned the current European programmes. ALPARC is leader of 2 of the 3 current projects: ALPBIONET2030 (ecological network and wildlife management) and YourAlps – (the setting up of a teaching module for schools on the issues facing the Alps and mountains) and partner of GaYA (youth and governance), and the diversification of ALPARC’s actions. The role of ALPARC within the Alpine Convention and the Alpine Macro-regional Strategy was redefined and the complimentarity of the two approaches in some cases, as for example the ecological network, was emphasised.

The members also decided to update the ALPARC communication strategy, to reinforce the cooperation platform in the German Allgäu (Immenstadt) and to explore the possibility of a second regional platform in the south west part of the Alps (a cross-border region between Austria, Italy and Slovenia) in order to be even closer to the territory and the projects being carried out by ALPARC together with its protected area partners.

A big thank you to the Berchtesgaden National Park for holding a very constructive General Assembly whose decisions clearly show that ALPARC is open to new developments and to the reinforcement of shared cooperation for the Alps.